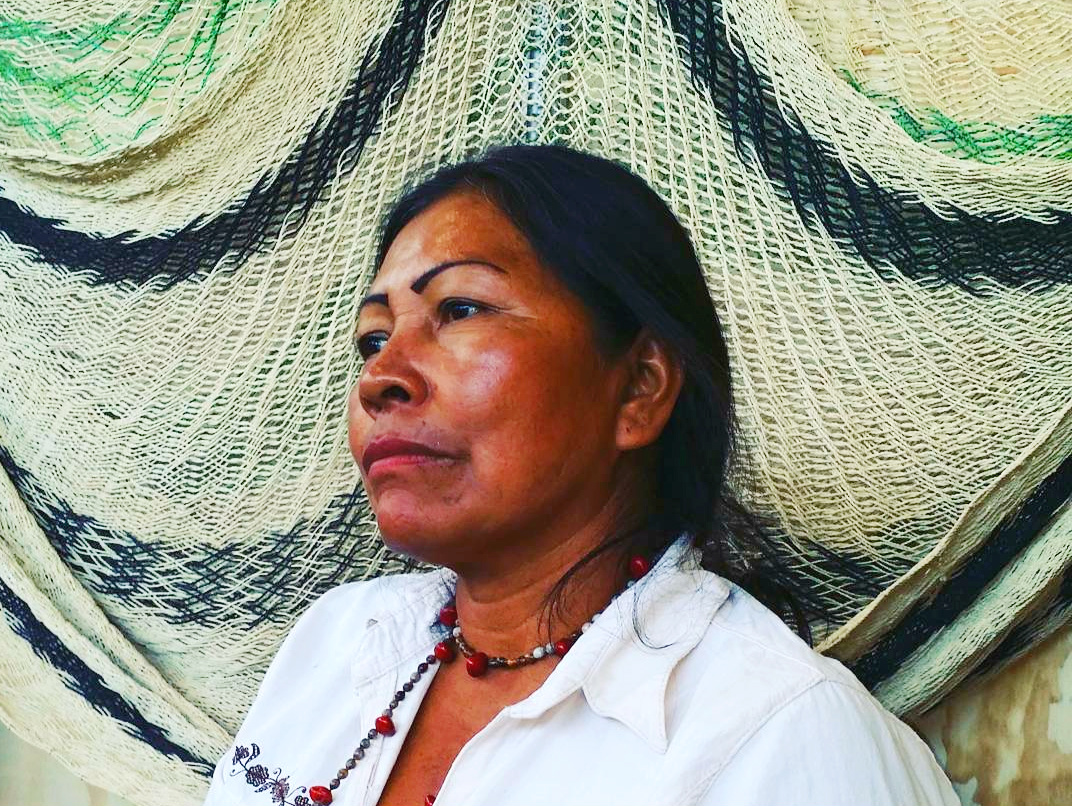 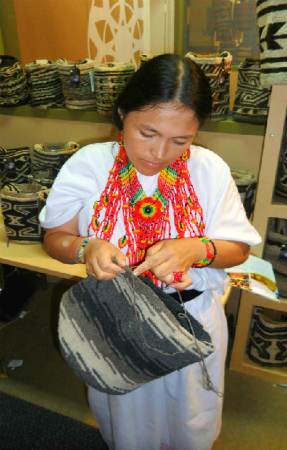 The Arhuaco people, direct descendants of the Chibcha Empire, originate from Colombia’s Sierra Nevada of Santa Marta. Believing the Sierra Nevada to be the center of the world from where the single creator, Kaku Serankua, entrusted them with the law of earthly stewardship, the Arhuaco are voices for peace. Their stewardship, Kunsamü, is reflected in all their actions. Stewardship is not only limited to care for the natural environment, but also care for human interaction.

Kunsamü is best exemplified by the ethical manufacture of bolsos or shoulder bags; a staple of the Arhuaco economy. Woven bags, made from wool of sheep raised by the Arhuaco themselves and dyed with vegetables harvested by their hands, speak to the strict adherence to their beliefs. Woven patterns are not simply aesthetic. They have meaning and pay homage to gods, traditions and history.

Now, corporate interests try to prevent use of corn as currency, claiming patent rights on all corn not inspected by the government; an impossible standard to meet. The ban has had a negative impact on the economies of the Arhuaco and many other indigenous peoples in Colombia.

Fortunately, the Arhuaco, are vocal about their struggle. They invite others to make it their own. We at Corocoro, accepted the Arhuaco’s invitation by spreading the word. We invite you to do the same by furthering fair trade and enjoying their authentic handmade works. 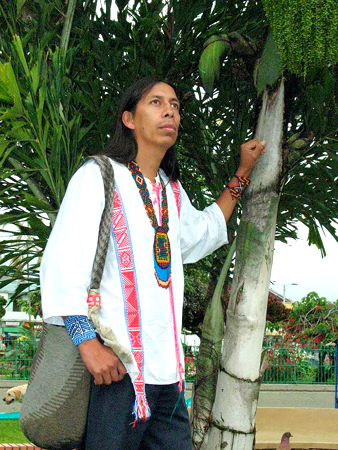 The Camëntsá are friends of the earth. Recognized as master craftspeople and artisans says far too little about them. They are guardians of indigenous art and language. As such they conserve their tongues through artwork and the written word. From their home in the Putumayo valley they make their voices heard. They make themselves visible.

Putumayo is unique in that it connects the Andes and the Amazon. The artwork of the Camëntsá, like their geographical placement, is living synchronicity. Woolen shawls and intricately woven belts speak of their connection to the Andes. Their skill in beaded works celebrate their Amazonian heritage.

One of the Camëntsá’s most prodigious sons is Hugo Jamioy, an unsurpassed artisan in beadwork, an activist for indigenous rights, a published author and poet and very dear friend. In recent years, his works and the thoughts that accompany them have been celebrated by the likes of the Smithsonian and the Colombian Department of Culture.

The Camëntsá practice the Art of Happiness. In a yearly celebration known as the Festival of Happiness and Forgiveness or Klestrinýe the people celebrate flora, fauna and even color as divine gifts of happiness. There is also the opportunity for each and every individual, through the guidance of the elders to be forgiven and to practice forgiveness. In that sense they are true artists who create with humanity. 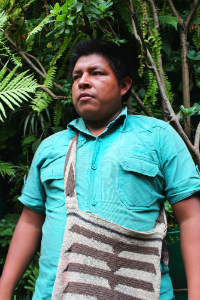 Unequaled in the craft of beaded work, the Embera command respect and evoke admiration from even the most experienced of artisans. From Colombia and Panama, the Embera are as multifaceted as their works and designs. There are Embera communities, that are coastal and as a result their works reflect the life of the sea and their relationship with it. There are Embera that populate the rainforests, who infuse their craft with the colors and designs that celebrate the flora and fauna that surround them.

Among the Embera are peoples of the mountains, rivers and valleys; all celebrating through their works the rich surroundings provided by Caragabí (also Karagabí or Carabí – Father of Creation and Society) and entrusted unto them.
The story of the Embera, as with so many other indigenous peoples from the Americas, took a dark turn beginning with La Conquista and persisting throughout the eras of Colonialism, Post-Colonialism and far into the 20th Century.

The 1960s brought a new era of victimization. The era of Enticement. Consequently, the Embera were given protected lands in exchange for a promise of self-governance in harmony with the Colombian and Panamanian secular and non-secular interests. However, among the Embera was the defiant people of the Cordillera, the Embera-Chamí, who refused to alter their social order to accommodate oppressive governments. They are egalitarian. They have no hierarchy outside of the due respect for the old and the joy of the new.

Through Corocoro’s friendship, sisterhood and brotherhood (“hermandad”) with the Embera, we have learned to laugh as the Embera do; always in the face of that adversity that keeps people apart. Because the Embera’s story resides in their hands, the ability to create human bonds is literally at their fingertips. Through beaded works of a singular quality, they oppose the efforts of others who seek to divide. They do so with a smile. 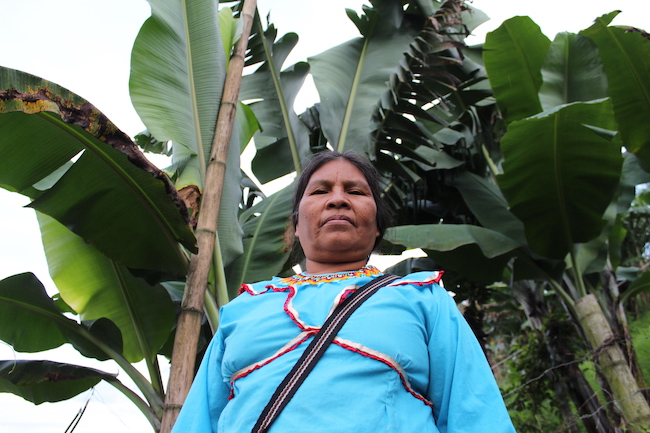 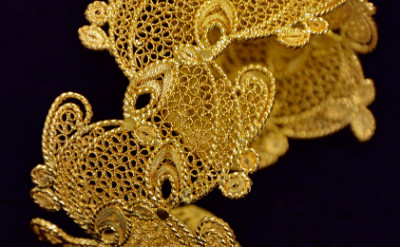 Nowhere will you find a more skilled and inspired collection of fine jewelry than in Latin America. The story of its people can be told in precious minerals and metals. We pride ourselves on a unique collection of pieces that speak to the natural elements, the urban chic, the melding of the past and present. 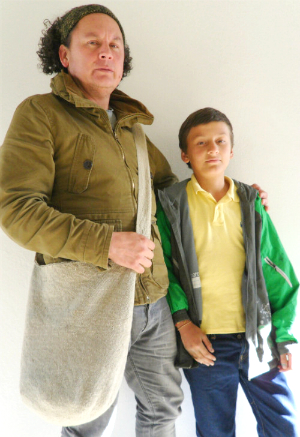 John Murcia is a leather craftsman of unparalleled skill. His collection of leather goods are inspired by nature, tradition, and the seemingly mundane which he expertly converts into magic. Readily recognizable due to its unique style, his works are coveted by the most keen-eyed connoisseurs of fashion accessories. He has a penchant for blending the traditional and the innovative to yield a timeless work.

Murcia’s work does not just appeals to the eye. It also appeals to the heart. Coupling his knowledge of leather craftmanship with a passion for helping others, John initiated a mentorship program, Guaira, through which he teaches his trade and self-sufficiency to troubled youths.

As a solid brother, father and community leader, there is no stopping his growth as an artist. His work is a testament to his spirit. He has a son that is a longboard racer and pride of his community. 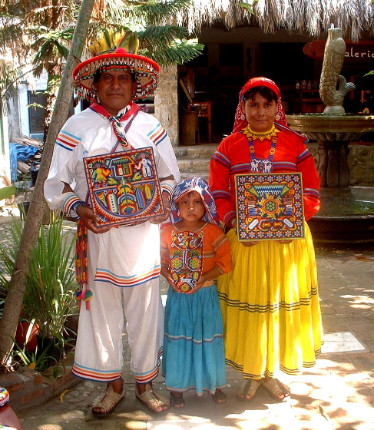 Huichol or Wixáritari artisans’ beadwork is celebrated throughout all Mexico. Traditional Huichol beadwork incorporates clay, stone and vegetable dyes. Due to the demand for their work and market conditions, the Huichol have adopted the use of ceramic and glass beads.

Enedína Herrera, a dear friend and learned artisan, is among these individuals whose works are featured by Corocoro. Knowing that Huichol artisans must compete in a market where imitations of their work are mass-produced, Enedina has managed to adapt without compromising the skill taught to her by generations preceding hers. “Because everything we do, we do with love, machines can’t copy that,” she says. 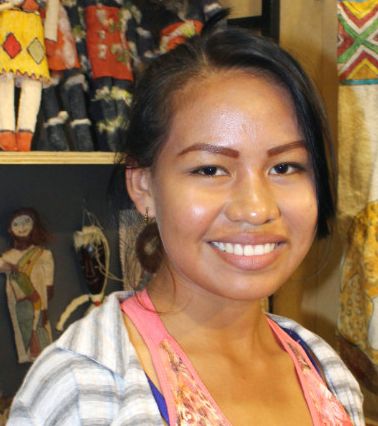 Among the many artisanal works of the Kuna people is the mola. Embroidered artworks that not only decorate the walls of homes, but are also used as statements of fashion. The intricate needlework and geometric patterns depict animals, birds, plants and day to day scenes of fishermen and farmers to decorate clothing garments.

The art of stitching molas is many centuries old, predating European presence in the Americas. Stitching patterns through several layers of un-hemmed cloth, allowing the frayed edges to reveal colors lying beneath the surface, is in keeping with Kuna belief: Despite the world’s apparent chaos, nature follows a pattern. 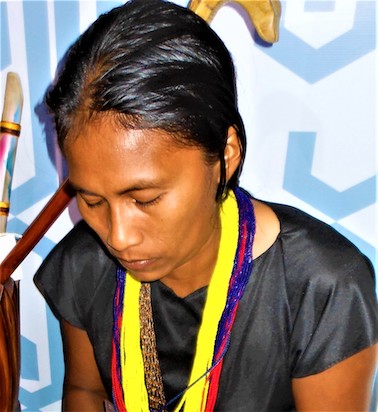 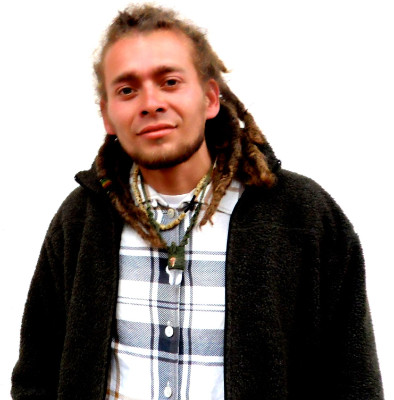 Jairo Andres Giraldo (AKA: “Mono Rasta”) has no known equal in the world of macrame and gem stone wearable art pieces. His influences are nature, his Rastafarian religion, and artisan code. Using calloused hands he weaves fibers and embeds rare stones to resemble the giant tucandeira ants of the Amazon, opalescent scarabs, guitars, tarantulas, plants and flowers. He humbly presents his works by stating that they speak for themselves. 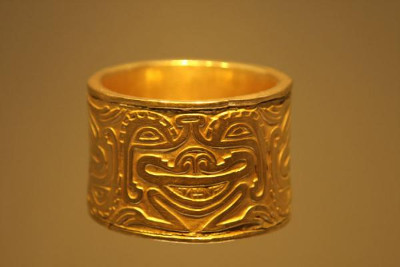 These pieces are reproductions of actual archeological finds, originating from cultures that inhabited and dominated in South America. Among these are the Chibcha People, an empire that reigned from 800 B.C. to 1,600 B.C. Among their principal economic staples was gold. As, a result, their skill in gold-works is unparalleled in South America. Throughout South America and the World, many of the originals, from which these pieces are reproduced, can be found in heritage museums celebrating ancient indigenous pre-Colombian cultures. 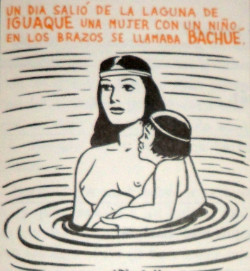 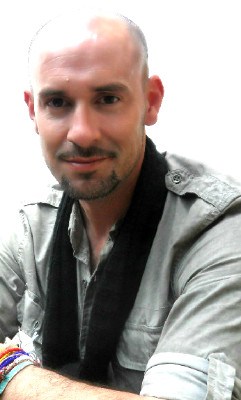 Latin American Social-Aesthetics is the term Raúl Peláez-Prada uses in describing his works. The appreciation of beauty serves as a vessel to explore society, and its surroundings. “El Amor entra por los ojos (“People take love in through their eyes”).

It is a Colombian proverb that cautions against superficiality and reading books by their covers. However, Peláez-Prada has discovered that the human weakness of superficiality can be a vessel to engage people in deeper dialogues about the world and themselves. Vibrant color and the human form entice the viewer to linger and open themselves to consider a more subtle message.

Artist Raúl Peláez-Prada was born May 7, 1976 in Princeton, Illinois to Raúl Peláez-Antelo and Marta Prada-Plata. Life has offered him many journeys, and he has made homes of Colombia, Bolivia, Mexico and the United States. Academics and intellectual curiosity were always priorities in his family, and along that vein, Peláez-Prada received his Bachelor of Arts in English Literature in 2000 from The University of Texas at Austin. In 2009 he obtained his Juris Doctor from St. Mary’s School of Law.

Peláez-Prada believes that beauty is meant to serve.
“Beauty has a purpose, it draws you in and in an instant you’re able to travel incredible distances. You’re open to consider things you otherwise wouldn’t. In that fraction of time the story of human struggle is best told.” 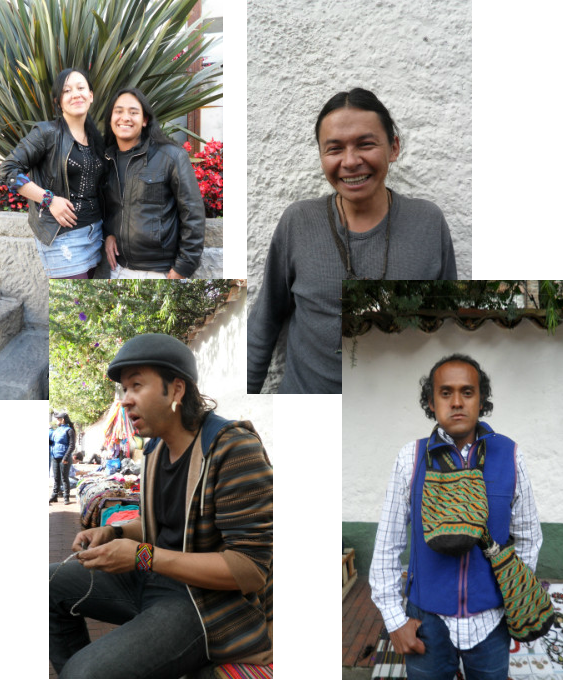 In Latin America, urban artisans are the timepieces, weathervanes and crystal balls of their respective cities. They collect on street corners and in market squares alarming the world to the arrival of morning. They scatter with the looming of night . Their clothes and tents can foretell the rain and the intensity of the sun. They speak of the past, tell of the present and gaze into the future. Corocoro curates objects and artifacts testifying to their creators’ brilliance, bearing witness to their lives. Every piece is selected to bring you a story. We invite you to be part of it. 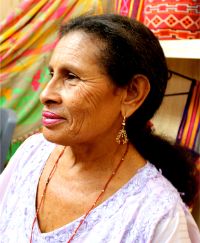 The Wayúu peoples of Colombia and Venezuela’s Guajira peninsula stand unparalleled in the artistry of hand woven accessories and décor. As stewards of the ancient weaving traditions of their ancestors, the Carib and Arawak peoples, the Wayúu have brought the richness of their past into our present.

Their work not only reflects the natural beauty of la Guajira through its use of color, but also, through their patterns, their work speaks of the multi-dimensional intricacy of the Wayúu’s world. It is nature seen through a crystal prism. It is optical laughter. The eyes become kaleidoscopes and all is varied and brilliant.
As a matriarchal society, the Wayúu depend on their women weavers’ work as a primary source of income. Corocoro was introduced to this community of weavers by María Ospina, an elder. She spoke of the importance of authenticity and the ever present threat of counterfeit reproductions in mass. She combats piracy by doing with her fingers what a machine and expediency cannot: weave a distinctly unique piece at a time.
Among the Wayúu’s signature artisanal works is the mochila or bag. The traditional mochila with its particular round design broad shoulder strap and characteristic sturdiness was born out of necessity and practicality. It carried the instruments to navigate day to day life in La Guajira. In time it became a statement of cultural pride and awareness. Today, the authentic mochila’s use by other peoples is seen by the Wayúu as a sign of cross-cultural solidarity and support. With a vast spectrum of colors combinations and geometrical designs, the mochila is an accessory that makes for a modern, yet timeless look.